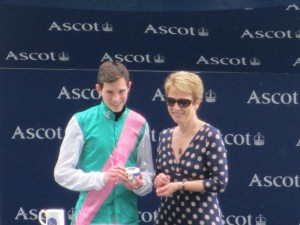 The St James’s Palace Stakes at Royal Ascot is the immediate target for Kingman and James Doyle.

Kingman is set to clash with Night Of Thunder in the St James’s Palace Stakes at Royal Ascot after an impressive victory in the Tattersalls Irish 2000 Guineas.

The John Gosden-trained Kingman was beaten into second place by Night Of Thunder in the QIPCO 2000 Guineas at Newmarket earlier this month.

Yet bookmaker Paddy Power believes he can go one better next time and has installed the son of Invincible Spirit as 4-5 favourite for the rematch on June 17, with Richard Hannon’s Night Of Thunder priced at 3-1.

Gosden left it until late to confirm the colt’s participation in the Irish Classic on Saturday, due to the wet ground that was rated soft to heavy as the field of 11 went to post.

The trainer’s decision to run was justified with an imposing five length victory. He raced wide for the bulk of the one mile contest, before challenging at the furlong and quickening well for James Doyle.

“Kingman is a grand horse and we all look forward hopefully to Royal Ascot and the St James’s Palace Stakes and meeting up with Night Of Thunder again,” Gosden said.  “That’s what you need in racing. You need those competitions and rivalries.”

“The thing that saved us [from withdrawing him], is that the track is in the most beautiful condition.

“The groundsmen have done a fantastic job here and it was pristine. Where we raced, the ground was fresh. If you had had a big handicap over that ground first, I probably wouldn’t have run.

“But we were given that ground fresh to race on and we stayed just off that rail where the sprinters had raced earlier – and that is good track management and placing of races.

“It is good management and good groundsmanship. Where we wind-up racing, is actually fresh ground and it makes a big difference.

Doyle added: “I couldn’t have wished the race to go any better really. He got into a lovely rhythm and when I let him down, just inside the furlong pole he really quickened up and it worked out nicely.”