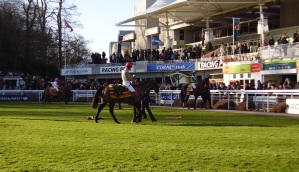 The ground is soft, heavy in places, at Sandown who stage a six race card on Thursday evening.

The going at Sandown is officially described as heavy, soft in places and more showers are forecast tomorrow ahead of the lucrative six race card that includes two Group 3s and a brace of Listed events.

“He manages the soft ground as well as anything does,” Kingscote said of his charge who landed the Group 3 Boodles Diamond Ormonde Stakes on soft ground at Chester earlier this month.

“He doesn’t need it, but he just copes with it better than most. He really strode nicely round the bends at Chester, I was pleased with him.

“He always runs his race, always tries his best and always looks magnificent,” the jockey said to At The Races.

The victory was Brown Panther’s eighth in a career spanning 19 starts that includes victories in the Goodwood Cup and at Royal Ascot. He is likely to return to the Royal meeting to contest the Ascot Gold Cup.

Part-owner Michael Owen, who races the six-year-old in partnership with Andrew Black, said: “Following on from Brown Panther’s exciting win in the Group 3 Ormonde Stakes at Chester last time out, the Henry II Stakes at Sandown Park seemed the most logical target.

“He came out of the race at Chester in great form and we hope he will run another big race and then go for the Gold Cup at Royal Ascot.”

Brown Panther heads the betting at 7-2 for the two miles and 78 yard contest at 7.15pm.