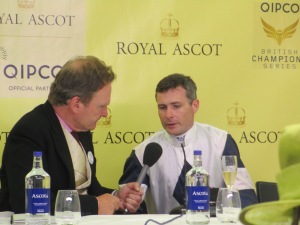 The Irish handler was in superb form at Royal Ascot, landing the Group 1 King’s Stand Stakes – for the second successive year – with Sole Power, the Group 1 Diamond Jubilee Stakes with Slade Power and the Group 2 Queen Mary Stakes with Anthem Alexander.

“We’re aiming Anthem Alexander at the Phoenix, where she will be stepping up to six furlongs,” Lynam told the Racing Post. “Her two wins have come over five but she ran over six on her debut on bad ground at the Curragh.”

At Royal Ascot the daughter of Starspangledbanner was strongly fancied by punters after a wide-margin win at Tipperary 13 days earlier and she showed plenty of fight at Ascot to secure victory by a neck.

The latest success was all the more impressive as she started slowly, but quickly made amends to chase the leaders and led for the last furlong despite strong pressure from runner-up Tiggy Wiggy.

“She was slow away from the gates, it was just a lack of experience,” winning jockey Pat Smullen said.

“I was there plenty early enough and it can be daunting for a young two-year-old horse at Ascot. She had a look round but it was so encouraging to see how she stuck on when she got to the front.

“She got challenged but she kept finding and she was going away at the line. She’ll get six furlongs in the future, she’s a good filly.

“She’s still a little bit green and there’s more improvement in her, she is a very good sprinter.

“She could’ve given up but she is 100% genuine. There was a tremendous amount of confidence in this filly and she was the sort of filly who we knew could win a Queen Mary.