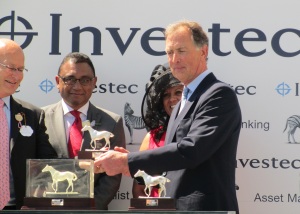 Connections of Thistle Bird are reaping the rewards of an ambitious programme that could see the mare race in the United States next month after Group race wins in England and Ireland.

Thistle Bird bagged her eighth win in 20 starts and her first success at Group 1 level when she landed the Newbridge Silverware Pretty Polly Stakes at the Curragh on June 29.

The daughter of Selkirk chased the leaders for the bulk of the 10 furlong contest before challenging two furlongs out and kept on well to score by two and three quarter lengths for George Baker.

“It was marvellously game of [owner] Lady Rothschild to allow me to keep her in training as a six-year-old,” Charlton said on his website.

“We now have the option of returning to Goodwood for the fifth time to run in the Nassau Stakes Group 1 on August 2, the Romanet Group 1 [for four-year-old and up mares at Deauville] on August 24 or travel to Arlington for the Beverly D Group 1 on August 16.

The victory followed her second successive win in the Group 3 Princess Elizabeth Stakes at Epsom Downs on Oaks day where she was ridden by James Doyle.

“First time out both this year and last she ran too fresh and green but today she was relaxed,” Charlton said immediately after the Epsom victory. “She’s very consistent and whereas she’s been quirky in the past she is a nice, sensible, sweet filly now.

“We took the hood off after that and she continued on her way. Earlier in the spring, I worked her with a hood and she worked really badly, so I thought I would leave if off.”

Doyle added: “She feels every bit as good as last year, if not better.

“I said to Mr Charlton earlier in the year, when she first started working, she feels like she has gotten stronger. I think that she has improved with age.

“She improved throughout last year and you have to forgive her first run. She’s a very highly strung filly, who has a strong will, and needs that run to take the edge of her.

“She is so straightforward and today was brilliant, it worked out great.”