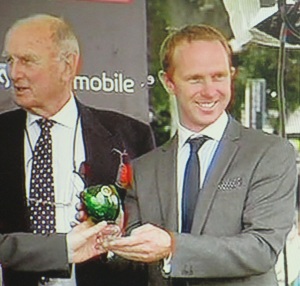 The Group 2 QIPCO Sprint Stakes at Ascot on Champions Day has been highlighted as a likely target for G Force after his victory in the Betfred Sprint Cup at Haydock.

The David O’Meara-trained three-year-old was held up in the early stages of Saturday’s Group 1 contest, before quickening impressively for Daniel Tudhope to overhaul last year’s winner Gordon Lord Byron and score by three quarters of a length.

The victory was the first at Group 1 level for trainer and jockey and immediate targets are the Sprint Stakes at Ascot – where he will need to be supplemented – and the Longines Hong Kong Sprint at Sha Tin in mid-December.

“I had every faith in this horse and he’s shown some class to do that as a three-year-old,” Tudhope said.

“He’s only small, but he has a massive heart and a great turn of foot. We were a bit unlucky [last start ninth in the Nunthorpe], I think we would have been placed that day. He’s a class horse and thankfully he got the breaks today.”

O’Meara added: “I’m a little bit overwhelmed. “I’m delighted for everyone who has put so much time into this. It’s just great.

“We thought he was good from day one, he hasn’t had the rub of the green a couple of times this year.

“He didn’t have much luck in running in the Nunthorpe, but we had every faith he’d be able to go and do it one day. We’re delighted he’s managed to do it today. “I’ll have to speak to the guys and see what they want to do.”

The colt is owned by Middle Park Racing, whose representative Nick Bradley has since indicated that Ascot and Hong Kong are the likely targets.

“There’s the Abbaye [at Longchamp on Arc Day], but it looks like he’s better over six furlongs than five so we’ll stick to six now and miss the Abbaye,” Bradley said. “There’s a race at Ascot coming up and it’s a Group 2, but I’ve been told we won’t get a penalty.

“Then there’s a race at Sha Tin in December. Adrian Beaumont [from the International Racing Bureau] was on the phone last night and he thinks we’ll get an invite to that.”

In related news the QIPCO British Champions Sprint Stakes on Champions Day at Ascot will be awarded Group 1 status from 2015.

Rod Street, chief executive of QIPCO British Champions Series, said: “We are delighted that the Sprint will be upgraded to Group 1 from 2015.

“The upgrade means we have doubled the number of Group 1 races on QIPCO British Champions Day from two to four in as many years and prize money has improved from £3m to £4m.

“The news ensures that QIPCO British Champions Day will further build on its status as the richest day’s racing in Britain and assist our sponsor’s objective of developing one of the best race meetings in the world.”