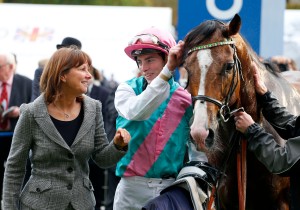 Noble Mission’s success in the showpiece race on British Champions Day emulated that of his full-brother Frankel, who was retired unbeaten after landing the Champion Stakes in 2012.

Frankel was trained throughout his sublime 14-race career by Lady Cecil’s late husband, Sir Henry, who died in 2013 after an illustrious career that spanned more than 40 years and included winning 10 trainers’ championships and four Epsom Derbys.

Lady Cecil took over the running of her late husband’s Newmarket yard and the training of Noble Mission, who has excelled this season after connections employed front-running tactics that has also resulted in Group 1 victories in France and Ireland.

“I knew that if he won it would be a fairytale and it absolutely was,” Lady Cecil said after Noble Mission and James Doyle had led from the outset and then repelled the determined challenge of Al Kazeem.

“James gave him a brilliant ride – we knew the horse was in the form of his life, but we hardly dared to dream it could happen. It’s a tough race and he absolutely toughed it out.

“I thought it was all over [when Al Kazeem edged ahead], but he just dug deep and James gave him an incredible ride. This is so special because of what happened two years ago. I keep thinking I’m in a dream and will wake up. It has come true hasn’t it?

“I had my head in my hands in the closing stages because I didn’t think he would hang on, but he’s so brave. Martin, his groom who rides him every day and virtually sleeps in his box, said he was in the best form. I’ve had so much support from so many people and I’m so grateful.”

Lord Grimthorpe, racing manager to owner Prince Khalid Abdullah, added: “James produced a great ride on an incredibly good, tough and classy horse. He put them to it, held them off, stuck to it and had a huge battle with Al Kazeem.

“To do that with that quality of field is remarkable. It’s nice to emulate your brother!”