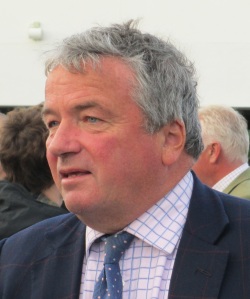 Trainer Nigel Twiston-Davies has high hopes for Kempton winner The New One this season.

By Simon Jackson at Kempton Park.

The New One remains joint-favourite at 7-2 with Paddy Power for the Champion Hurdle after a decisive victory in the Listed feature race at Kempton Park’s first jumps meeting of the new season on Sunday.

The New One’s victory completed the third leg of a 30-1 treble for trainer Nigel Twiston-Davies and his jockey-son Sam, following the victories of Fond Memory in the two mile Novices’ Chase and Wood Yer in the three mile chase.

Sam Twiston-Davies bided his time on The New One before challenging at the second last and pushing on to win the race for the second successive year. The six-year-old was racing for the first time since winning a Grade 1 at Aintree in April, the victory following a desperately unlucky third in the Champion Hurdle.

The latest success delighted his trainer: “That was just what we needed. Now we will look at the Haydock race next month [Grade 2 Betfair Price Rush Hurdle]. We will then maybe come back here for the Christmas Hurdle,” Nigel Twiston-Davies said.

“As we always say, the horse will tell us [where to go next]. He could race six times this season and finish at Aintree. Hopefully this year will be our lucky year.”

The £25,000 contest was the second of two Listed events on the seven-race card. The first of them – a £20,000 race over two miles – went to the Dan Skelton-trained Blue Heron who impressed winning rider Harry Skelton and who described the character of the winner as being ‘as hard as nails’.

In other races, the David Pipe-trained newcomer Stars Over The Sea earned a quote of 16-1 (Paddy Power) for the Triumph Hurdle after a six-length victory in the two mile juvenile hurdle.

“I was keen to get him out early and get some experience,” Pipe said. “He was a decent horse on the flat for Mark Johnston and hopefully he will do well over hurdles.”

In other news Queens Park Rangers manager Harry Redknapp, whose team early on Sunday lost 3-2 to Liverpool, had cause to celebrate when his horse Violets Boy won the penultimate race.