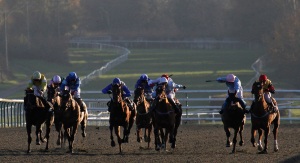 Chelmsford City will host racing on the all-weather in the south east alongside Kempton Park and Lingfield Park (pictured). Pic: Courtesy of ARC.

Horse racing will return to Essex on January 11 following news that Chelmsford City has been awarded 58 race meetings as part of the 2015 fixture list.

The British Horseracing Authority (BHA) on Monday confirmed that the track, which is located on the site of the former Great Leighs racecourse, had been allotted the meetings as part of the 1471 fixtures programmed for the UK in 2015.

Great Leighs, an all-weather track near Chelmsford, was the first new racecourse in the UK for over 80 years when it opened in 2008 but went into administration the next year after just 44 meetings and has since been sold to the current owners.

The chances of racing returning to Essex became a reality earlier this year, when the BHA offered the Essex track 12 start-up fixtures on their all-weather track for 2015.

Paul Bittar, BHA chief executive, said: “The development of the 2015 Fixture List has been among the most complex and challenging in recent years.

“From the outset we have sought to make it a structured and collaborative process, both in the form of the original Fixture List consultation and subsequent communication following the completion of the consultation process.

“We are delighted with, and thankful for, the level of engagement from the industry stakeholders including the betting industry. Consequently we have now developed a framework for engagement and collaboration which we hope will allow BHA to tackle effectively further issues related to the Fixture List and race programme in the coming years.

“The principal focus for the 2015 Fixture List was to address the issue of the growing number of uncompetitive, small-field races which are both unattractive for the punter and damaging to British Racing’s international reputation.

“Put simply, the current horse population is not able to satisfactorily sustain the number of races we have staged in recent years. As such, while the Fixture List is similar in size to 2014, and this is a position supported by all stakeholder groups, steps have been taken to address imbalances to ensure that more fixtures and races are staged at periods in the season when the supply of horses is better placed to meet the demands of the Fixture List.

“While focusing on the sporting elements and delivery of more competitive racing, the overall economics of the sport are protected through this approach.”