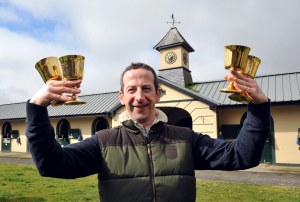 The 2014 Betfred Cheltenham Gold Cup winner Lord Windermere is amongst 98 entries revealed on Wednesday for the 168th running of the Grand National at Aintree on April 11.

Lord Windermere has been entered along with stablemate Spring Heeled by trainer Jim Culloty, who rode Bindaree to victory in the world’s greatest steeplechase in 2002.

As a jockey Culloty also won three Cheltenham Gold Cups on Best Mate between 2002 and 2004. Last year he joined an elite group of horsemen to have both ridden and trained Gold Cup winners when scoring with Lord Windermere.

Weights for the £1million Crabbie’s Grand National will be announced on February 17 by the British Horseracing Authority’s (BHA) head of handicapping, Phil Smith, at the Royal Opera House in London.

The number and high-quality of the entries, that includes last year’s winner Pineau De Re and Hennessy Gold Cup victor Many Clouds, has pleased John Baker, the regional director of the Jockey Club’s north west racecourses that includes Aintree.

“We are delighted with the 98 entries received for the 2015 Crabbie’s Grand National,” Baker said.

“It is another bumper entry with many great stories lying in wait. A Betfred Gold Cup winner and this season’s Hennessy winner, plus last year’s Crabbie’s Grand National hero and this season’s Becher Chase winner are all engaged.

“The leading jump trainers are well-represented which is terrific and, as ever, there is plenty of support from Ireland.

“We all now eagerly await Phil Smith’s verdict on February 17 when the weights are revealed.”