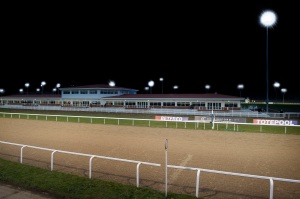 Merdon Castle booked his place in the Unibet Three-Year-Old Sprint at the All-Weather Championships Finals with a narrow win at Chelmsford City on Wednesday.

The David Elsworth-trained colt overcame a slow start in the five furlong Class 2 to race close to the pace for jockey Liam Keniry, on the second of three days’ racing at the Essex track this week.

The son of Acclamation fought well in the closing stages to prevail by a neck in the £20,000 contest that was a Fast-Track Qualifier for the £150,000 sprint final at Lingfield on Good Friday.

The victory was his second in five starts that includes an unplaced run in the Listed Windsor Castle Stakes at Royal Ascot. Connections have confirmed that Finals Day is now his immediate target.

“Merdon Castle won nicely on his first run last season and had to give three pounds next time out when he was second to Kool Kompany, who went on to show strong form,” Keniry said.

“He was well-fancied for the Windsor Castle but came back with a bit of a problem and that is why he had a bit of time off.

“The last race [when second] at Kempton just sharpened him up a bit. It was his first run since Royal Ascot and he was entitled to need it.

“He felt much sharper today. He was a little bit anxious in the stalls and I didn’t get the start we were hoping for but it worked out fine in the end.

“I was able to get into a decent position on the bend and he has ground it out well. He stays five furlongs well.

“Hopefully, he can be a serious contender on Good Friday.”

Wednesday’s card was the second fixture at the new Chelmsford City racecourse where tickets could be purchased at the gate. It followed the first fully-public meeting on Sunday, after three ‘trial’ fixtures.

Chelmsford City Managing Director Phil Siers said on Sunday that he was pleased with the turnout. “It was fantastic to see so many people visiting Chelmsford City for the first time,” he said. “It was a cold day, but that didn’t dampen anyone’s spirits.

“Overall today was another encouraging day for the racecourse.”