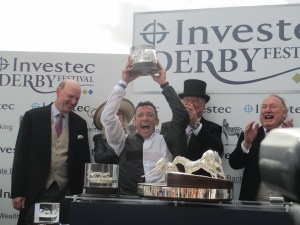 Golden Horn is best-priced at 5-4 (Ladbrokes) for the King George VI and Queen Elizabeth Stakes at Ascot on July 25 after he led throughout to land the Coral-Eclipse Stakes at Sandown.

The John Gosden-trained son of Cape Cross is as short as 4-6 elsewhere after he became one of few horses to complete the Betfred Dante, Investec Derby and Coral-Eclipse treble on Saturday.

Golden Horn was sent to the front of the field of five runners by Frankie Dettori as last year’s French Derby and Irish Champion Stakes winner The Grey Gatsby raced upsides for the bulk of the journey.

The Grey Gatsby looked dangerous two furlongs out but Golden Horn responded well to maintain the advantage. Golden Horn asserted inside the distance to extend his lead and score by three and a half lengths.

“I think the moment the draw came out we knew we had to go forward. We hoped someone else would go on and they didn’t,” Gosden said of his charge who is now unbeaten in five starts.

“For him to go forward like that, something he has never done before in training, shows how versatile he is. He did it beautifully.

“What a lovely clean race, with The Grey Gatsby right there. It was clean all the way, with a top three-year-old and a top older horse. The Grey Gatsby ran a blinder. It was only in the final furlong that he shook him off,” Gosden told Sky Sports.

“I thought it was a real ding-dong and then in the last furlong he’s asserted properly and strongly. He’s found three lengths.

“If he’s in good form, of course the King George would be wonderful to run in, but if it’s a dance too far then we wouldn’t. We’ll do right by the horse.

“He’s not in the Arc, so he’d have to be supplemented. I think he’d be an Arc horse unless it went bottomless.”