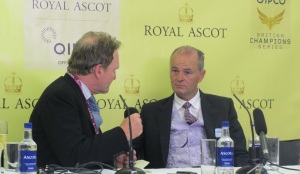 Eddie Lynam is targeting back to back victories in the £500,000 Darley July Cup at Newmarket on Saturday where he is set to be represented by Sole Power and Anthem Alexander.

Lynam landed the Group 1 last year with Slade Power whose victory in the six furlong contest continued the Irish handler’s good form in the race.

Sole Power, the winner of 11 races and close to £2million in prize money, was fifth at his last start in the Group 1 King’s Stand Stakes at Royal Ascot.

Sole Power was fifth in the July Cup in 2013. Lynam is hopeful of another good run from the eight-year-old and Anthem Alexander, the 2014 Queen Mary Stakes winner who was third in the Commonwealth Cup at this year’s Royal meeting.

“Sole Power and Anthem Alexander are both intended runners and Richard Hughes and Pat Smullen will ride as usual,” Lynam said.

“In my opinion the Darley July Cup is the jewel in the European sprinting crown and, having won it last year [with Slade Power] and had two horses in the first five the year before I am very happy to have two contenders again this year.”

“I have not done much with either of them since Ascot and have just tried to freshen them up, but they both seem very well.”

“Sole Power ran well in a very good Darley July Cup two years ago, finishing fifth, beaten in a photo for third, and though he has never won over six furlongs he’s finished in the frame in a Haydock Sprint Cup and been second in a Group 1 in Hong Kong over this trip.”

“They just didn’t go the end-to-end gallop that he needs at Ascot. He owes us nothing and we are not afraid to lose.”

“Anthem Alexander is trying to become the first three-year-old filly to win this race since Habibti [in 1983] so it’s a big ask for her and it looks hard for her to reverse Ascot form with Muhaarar.

“But she is a Group 3 and Group 2 winner who has twice been placed at Group 1 level so we felt that this is the right race for her.”