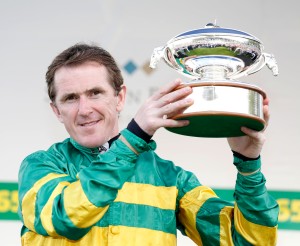 Champion jumps jockey AP McCoy who retired in April will receive a lifetime achievement award at the BBC’s Sports Personality of the Year show in Belfast on Sunday.

The 41-year-old was champion jockey for 20 successive seasons and set the standard throughout his sublime career that included becoming the first jockey to ride 3,000 and then 4,000 winners.

A brace of Cheltenham Gold Cups [Mr Mulligan and Synchronised] and the Grand National on Don’t Push It were amongst those victories. But the champion believes his greatest achievement was in the 2001/02 season when he rode 289 winners to surpass Sir Gordon Richards’ long-standing British record of 269 winners.

McCoy was the first jockey to be crowned Sports Personality of the Year, after winning the Grand National at the 15th attempt on Don’t Push It in 2010.

“It’s a huge honour and I’m thrilled to be accepting it so close to home in Belfast,” said McCoy who has also twice finished third in the main category.

“Like the main award, it’s very prestigious, only with the lifetime award you aren’t going to win any more after that. That is the only disappointing thing about it.”

“I’ll be very proud. I’m going to have four Sports Personality of the Year trophies in my house so that’s kind of a nice thing to have.

“The main award is voted for by the public and it’s nice to have that respect for what you’ve achieved.

“I felt very lucky that the racing public got behind me, and it was pretty much down to them that I was able to win it. It’s a great occasion and a great trophy and the best sportspeople have won it,” he told BBC Sport.

Barbara Slater, BBC’s director of sport, added: “A previous Sports Personality of the Year winner and widely regarded as one of the greatest jockeys of all time, AP was the biggest superstar of racing until his retirement this year.

“It’s an honour to celebrate his illustrious career in Belfast, Northern Ireland, his home nation, with the lifetime achievement award.”