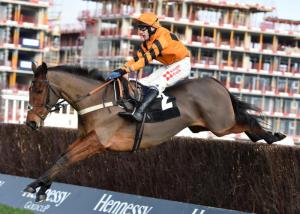 Thistlecrack extended his unbeaten record over fences to three at Newbury on Hennessy day in November. (Pic: Courtesy of Newbury Racecourse).

KEMPTON PARK hosts their flagship meeting of the season – The 32Red Winter Festival – on December 26 and 27 that features the Grade 1 King George VI Chase.

The King George has been won by a host of top-class chasers that includes multiple winner Desert Orchid and Kauto Star, whose statues’ stand near and inside Kempton’s parade ring where last year Cue Card returned victorious after a thrilling victory.

Cue Card maintained favouritism for this year’s King George when winning the Betfair Chase for the third time at Haydock in November. Yet he may face an intriguing rival in high-class stablemate Thistlecrack as Tizzard has not ruled out running the unbeaten chaser at Kempton.

Thistlecrack secured his third successive win over fences when landing a Grade 2, three mile novices’ chase on Hennessy day at Newbury. He currently heads the betting for the Cheltenham Gold Cup.

“Thistlecrack was brilliant today,” Tizzard said at Newbury. “Any fears that we had from Cheltenham were put to bed. We came here because of what went on at Cheltenham. He was a bit sketchy then but was immaculate today. It is experience, that’s all it is. We needed to get some runs into him before whatever we are going to do after Christmas.

“He gives his fences plenty of daylight but that is better than going fast and low at them. He learnt from his run at Cheltenham. You can school them lots at home but they still need racecourse experience.

“I wouldn’t have thought he’d be ready to go for the King George but will leave him in the race for a while yet, just in case.”

Winning jockey Tom Scudamore added: “It was a great thrill. Joe [Tizzard – trainer’s son and assistant] said that we were three seconds outside the track record and Thistlecrack never came out of second gear. He has jumped brilliantly today. There are more tests to come obviously and he has got to step up and take on better horses but he was pretty good on this occasion.

“I think everyone was a bit harsh on him at Cheltenham. He made one mistake there and, if you watch him at the next ditch, he has got some height at it and has gone that far out the other side. He is a quick learner and I think it was just a case of him being full of himself that day. After that mistake, he backed off his fences.

“He was superb today. He has really learnt from the last time and keeps on learning. He is a very fast learner and, even at this early stage, he is something different.”

In other news, Kempton will be running a bus service from Kew Station to the racecourse as trains do not operate on Boxing Day.