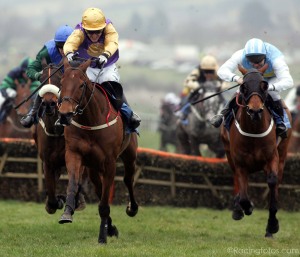 Racing towards the winning line at the Cheltenham Festival. Pic: Racingfotos.com (Courtesy of Great British Racing).

The race, which carries total prize money of £45,000, will be shown live at 2.25pm on new racing channel ITV4 – who will be televising their first Saturday afternoon card since taking over racing coverage from Channel 4 last Sunday.

The one mile, seven furlongs and 216 yard Sandown feature was won last year by Yorkhill, subsequent winner of a novices’ race at the Cheltenham Festival where prize money for 2017 has been boosted by £190,000.

Ian Renton, regional director, Cheltenham & south west, said: “I am delighted to announce record prize money of over £4.3 million for The Festival which represents an increase of more than 10 per cent since 2015.

“We would like to thank all our sponsors who have assisted us in improving prize money for The Festival and look forward to four great days of racing in March.”