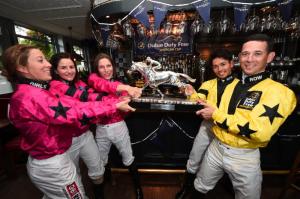 MELBOURNE Cup-winning jockey Michelle Payne is one of the star names at the Dubai Duty Free Shergar Cup at Ascot on Saturday.

The Shergar Cup is a unique six-race event where three top riders in each of four teams – Great Britain & Ireland, Europe, Rest of the World and The Girls team, which is comprised of Payne, Hayley Turner and Canadian jockey Emma-Jayne Wilson.

Payne burst into the big-time with a shock win in the 2015 Emirates Melbourne Cup on 100/1 shot Pride Of Penzance . She has recently started combining riding with training and is soon to take over the handling of Kaspersky, who she rode to finish fifth in the Group 1 Queen Anne Stakes at Royal Ascot this year.

“It is nice to come to Britain again. I was out here eight years ago, riding in races and trackwork and came for two weeks around Royal Ascot this year,” Payne said.

“Riding at Royal Ascot was incredible, very prestigious, and I cannot describe the feeling of how special it was to be out there competing. It was really a great day.

“We expected Kaspersky to run well – he is a top-class galloper. I plan to ride him on the Saturday after the Shergar Cup at Newbury and then the aim will be to come out for the Spring Carnival this year.

“We are hoping that he will run in the Cox Plate and the race is second to the Melbourne Cup that everyone wants to win in Australia. Fingers crossed, he will make it there in good order. He will be my first ride in the Cox Plate.

“After the Spring Carnival, I intend taking him to my farm and training him from that day onwards. I have 22 horses at my farm and half of them are in training. I have some really nice horses coming through, some who have just turned two, and that will be a lot of fun to see how they turn out.

“Training, as well as riding, is something I have been aiming at for the last seven or eight years so I am doing what I love.

“I am going to stay small as a trainer and have a capacity of 16 horses in training at one time. I really want to enjoy it and have a good quality stable.

“I am riding the majority of the horses I race. But I am surprised how much of a buzz I get out of just watching them race as opposed to riding them as well. A lot of effort, time and money has gone into the training venture.

“I am just loving riding my own horses – you get to know them so well. I would ride for a lot longer if I could, due to the amount of bad falls I have had, there has to be a time when I hang up the silks.”