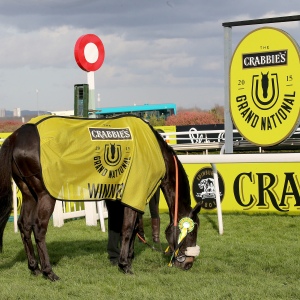 Definitly red bids to follow the exploits of Many Clouds who carried a big weight to win the 2015 Grand National.(Pic: Courtesy of Jockey Club Racecourses).

DEFINITLY RED heads the weights with 11st 10lb for the £1-million Randox Health Grand National at Aintree at 5.15pm on Saturday, April 14.

The Brian Ellison-trained nine-year-old was one of the leading contenders for the 2017 National, but was pulled up on the first circuit due to a tack problem.

Definitly Red, a 20-1 shot for the National, has been in great form this season, with Grade 2 wins in the Many Clouds Chase at Aintree in December and the BetBright Trial Cotswold Chase at Cheltenham on January 27.

Blaklion, trained by dual Grand National winner Nigel Twiston-Davies, is the 10/1 favourite and has been allotted 11st 6lb after his 12-length victory in the Randox Health Becher Handicap Chase over the Grand National fences at Aintree in December.

Twiston-Davies said: “My initial impression is that the weights are as we expected them to be.

“Bristol De Mai will not be running. He is being aimed at the Betway Bowl at Aintree instead. The owners have decided not to run him in the National this year but he could maybe go for the race in the future.

“We have the Becher Chase in the bag with Blaklion already this season. We will ride Blaklion differently this year in the National. Stamina is not a particular worry – I think he was beaten eight lengths in the race last year. No blame on Noel (Fehily) last year – he kicked on a mile from home – maybe if we don’t kick on a mile from home this year we can make up that ground.

“Blaklion goes to Haydock next for the Betfred Grand National on Saturday. I think it makes more sense at the moment to go to Haydock as there is a good space between that race and Aintree. He is also still in the Gold Cup, which is tempting, but we will probably not go Cheltenham. I am not ruling it out, we will just have to see what happens.

“I have done some research looking at the weights. Red Rum used to win with top-weight and there are quite a few over the years who have won with big weights, including Neptune Collonges and Many Clouds in recent years.

“I don’t know whether it sounds a bit silly but Blaklion reminds me of Red Rum. He is small and very neat over his fences. When you watch the way he has twice jumped around Aintree, he doesn’t seem to make a mistake and is very agile. He seems a clever little horse.

“He doesn’t really compare to my previous National winners. I would say Blaklion is more of natural than those two – Earth Summit was a good old slogger while Bindaree was a very, very talented horse who didn’t have to try that hard.

Twiston-Davies added: “Flying Angel has just had a wind operation. He is next run will be at Aintree, although I don’t know in which race yet.

“Cogry and Splash Of Ginge look like they won’t get in. Double Ross jumped beautifully at Aintree last time when the saddle slipped going round the Canal Turn and could be interesting.

“The whole thing about the Grand National these days is that it is such a competitive race. You used to have horses going round with 12 stone while now the weight range is now between 11st 10lb and something like 10st 4lb – it’s not a huge difference.”