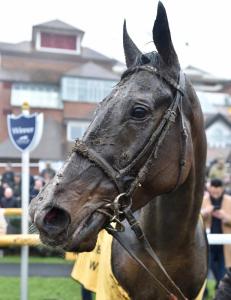 Kalashnikov has won four of his five starts. (Pic: Courtesy of Newbury Racecourse).

KALASHNIKOV booked his place in the Sky Bet Supreme Novices’ Hurdle with a decisive win in the Grade 3 Betfair Hurdle at Newbury on Saturday.

Settled in mid-division, Kalashnikov improved his position from the third fence to take up the running two out and stayed on strongly to score by four and a half lengths in the extended two mile contest that carried prize money of £155,000.

The victory was the fourth in five starts for Kalashnikov who ran very well when second at his last start in the Grade 1 Tolworth Hurdle at Sandown in January.

Kalashnikov is trained in Newmarket by Amy Murphy and owned by the trainer’s father Paul Murphy. The winning trainer said: “It’s unbelievable – I am lost for words.

“I couldn’t see him in the early part of the race but when they turned in I could see what was left of his mud-splattered white face.

“He proved that he had every right to come here after the Tolworth and novices have such a good chance in this race. I thought that we should come and have a crack at it because he wouldn’t have a weight like this again.

“I think the better the ground, the better it is for him. He is such a lovely-actioned horse that I think he will only improve for it.

“We have loved him from day one and the good ones train themselves – I just have to hang on daily.

“I wish my father was here today but he’s actually in the air on the way to South Africa. Hopefully, he will be straight on the phone when he lands.

“He was one of the biggest horses in the paddock today and is a lovely, big chasing type and that is what he is bred for, being from the family of Kicking King. Anything he is doing now is a huge bonus.

“Jack [Quinlan, jockey] is so under-rated and I always get angry that he doesn’t get more rides. He is such a good jockey and has formed a really good partnership with this horse. They are going places together.”

The winning jockey added: “Kalashnikov is a horse that we think an awful lot of and, on good to soft ground, we would have really fancied him. The rain was a bit of a worry because he got a bit bogged down in the heavy at Sandown and, to be fair to him, he hasn’t enjoyed it through the first mile.

“His class has brought him through – he is just so tough and brave in those conditions. He is only a five-year-old and that was only his fifth start, so he’s entitled to mature all the time and he has improved since Sandown.

“We have loved him from day one and he has continued to improve with every run. You see the size of him and how well he has jumped out there – he is going to be even better over fences next year.”