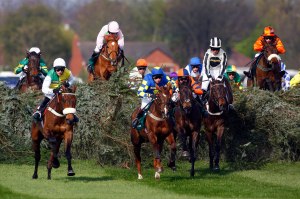 Moore has high hopes for Traffic Fluide who has been allotted 10st 10lb for the world’s greatest steeplechase and has been kept fresh since landing the valuable three-mile Grade 3 Sodexo Gold Cup Handicap Chase at Ascot in early November.

That was the nine-year-old’s second success from his last three starts over fences, having ended last season with a victory in the Grade 2 Silver Trophy Handicap Chase over two miles and five furlongs at Cheltenham in April.

Moore, based at Lower Beeding, West Sussex, said last week: “We are very happy with Traffic Fluide at the moment.

“I have never trained a Grand National horse before, but for me Traffic Fluide ticks most of the right boxes.

“I have been trying to put a lot of stamina into his work. They used to say that you need a two and a half miler to win the Grand National. He won a good race over three miles last time so there is stamina there and the fact he has the pace to hold a position is important.

“I think he has a nice racing weight, particularly if the weights stay the same.

“My only real concern would be if the ground turned soft because he does like better ground.”

There are currently 100 entries for the Randox Health Grand National, that permits a maximum field of 40 runners.